This is the first post I’m sharing from my “500 words” experiment earlier this year. I wrote the original version early on April 10th. I’ve since changed jobs.

What I do is pretty easy, really. Sometimes I say that my job is telling idiots how to do simple things, which is mean and wrong, but like all good self-depreciating lines contains a small but important truth.

Everyone else in the office knows a whole lot of stuff that I don’t. I depend on them to do all that “other stuff” that isn’t my job, and which I can’t do. They’re not idiots, and I don’t tell them what to do.

What does feel true, to me at least, is the “simple things” bit. It feels like my work is pretty straightforward stuff, which means I’m a good match for the role I have. It feels like I’m just doing really obvious stuff that anyone could do. It’s difficult to imagine that other people rely on me to do that “other stuff” that isn’t their job, and which they can’t do.

Simple things are only simple because I know how to approach them. I struggle to see that, objectively, my job isn’t simple. I forget that most people couldn’t turn up and just start doing what I do. And then I end up believing the “idiots” bit, which is bad.

I don’t make great things the likes of which the world has never seen before. I’m not labouring at the intersection of inspiration and genius. I’m doing shit like editing things and trying to structure a lot of information in a useful way. Even if what I do seems obvious to me, I’m “adding value” without changing the world.

Sometimes I add value (that’s the last time I use that cliché, I promise) by doing things that aren’t obvious to other people. I do stuff that they wouldn’t have thought of themselves. Hell, that’s why they pay me – because not everyone can do it. This carries the related but opposite risks of arrogance (“look at me improving your shit without even trying!”) and forgetting my own value (“no, don’t thank me; all I did was make some really simple changes”).

As far as this next point is concerned, it doesn’t actually matter whether I’m mentally magnifying or minimising what I bring to my team. What can happen next is that I fall into the trap of undervaluing the people by judging them on their ability to do my job. How weird is that? Oh, empathy, you elusive bitch.

Judging my workmates on the wrong criteria like this can, if unchecked, lead to me thinking that I’m the smartest guy in the room. This is bad for my easily-inflated ego, bad for my motivation and bad for the way I behave. It’s also bad for the work I do. If I’m pretty sure that I’m the best one around, I’m not going try so hard to impress anyone else.

So I guess that the point of this is to remind myself to value other people in the right way, not the wrong way.

Or maybe it’s that I should get smarter, get better at things, and start doing work that doesn’t leave me kind of unimpressed with my own abilities. I’m not smart or skilled enough at anything yet, but that would be pretty damn cool.

But that sounds like effort, and maybe I don’t know what I want to be good at. Maybe because I don’t really appreciate what I’m already good at, this might be a rabbit hole without an end. Or a rabbit. 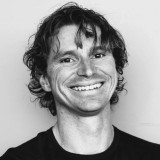